Bringing a caregiver into the home is not something that most people are comfortable trusting to just anybody. Assured Quality Home Care has made themselves an invaluable partner in providing quality, loving care along with a level of expertise that exceeds other home care agencies in Connecticut.

“We believe their story will be meaningful as well as educational to our viewers,” said Gordon Freeman, Executive Producer of the show.

As part of the show, How2Media sent a film crew to spend time at the agency’s facilities in Norwich, Connecticut to find out what the story behind the story is with this great and growing home care agency, and to show the “World’s Greatest!...” viewers why Assured Quality Home Care was selected as the best in their category and therefore featured on the show.

“World’s Greatest!...” is a thirty-minute show dedicated to highlighting the world’s greatest companies, products, places, and people. Each show is a fast-paced tour around the world featuring behind-the-scenes footage, informative interviews, and exciting visuals.

What Makes Assured Quality Homecare, One of the "World's Greatest!..."?

Over the past five years, Assured Quality Homecare, LLC has established itself as Connecticut’s best home care agency with multiple awards and accolades, an industry-leading Personal Care Aide Certification Training program, and a new Private Duty Nursing service called NursePower. As an industry leader in Homecare services, they strive to make an ordinary care experience, extraordinary by proving families with in-home services that create relief and peace of mind.

Assured Quality Homecare was featured in Episode 304, which aired on Bloomberg TV on 7/10/2021

How2Media is a 21st Century television production company. Their award-winning programming can be seen on national cable channels and local network affiliates across the country. For more information on How2Media and their show lineup, please visit How2Media.tv

About World's Greatest
World’s Greatest TV Show is a National Television Series that brings people, places, and companies into the spotlight. Brought to you by the award-winning researchers and producers at How2Media Productions in Boynton Beach, Florida, World’s Greatest is currently in its 14th season and continues to surprise audiences with quality “edutainment” that entertains while it educates. Featuring companies and organizations of all sizes (including some of the most recognized and respected brands the world has to offer) World’s Greatest prides itself on highlighting the positive and making sure that audiences are able to connect with and understand the companies behind products people use every single day.
Learn more about "World's Greatest" at worldsgreatesttelevision.com.

About Assured Quality Homecare LLC
Assured Quality Homecare LLC (ASQ Homecare) is an award-winning home care agency and leader among home care agencies in Connecticut. They are a nationally recognized Best of Homecare® Company, a four-time Employer of Choice award recipient, and a two-time recipient of the Best of Readers Choice Top 3 Home Care Agency award. For more information on ASQ Homecare, visit www.asqhomecare.com or call 860-373-0428. 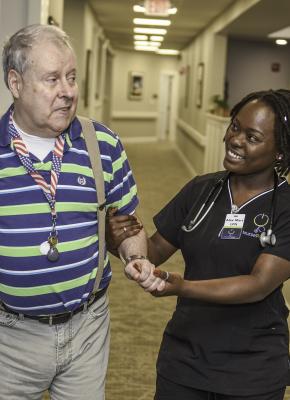 How can NursePower help you?

We save you time & effort

We give you peace of mind

We reduce your confusion

Samanta Descombes Roseme, also known as Sam, is the Founder and Chief Visionary Officer (CVO) at Assured Quality Homecare (ASQ). As the CVO, Sam is responsible for setting ASQ’s vision, mission, and goals and ensuring that the company is aligned. Sam brings in over 8 years of experience in the Healthcare field and has a Bachelor’s degree in Registered Nursing from the University of Connecticut. In 2016 Samanta, along with her husband Caleb, founded Assured Quality Homecare with a vision of providing high-quality, trained, and compassionate caregivers to the aging community of New London, CT. Samanta and Caleb are raising three beautiful children, and as a mother and woman of faith, you can find Samanta volunteering at her church in her free time.